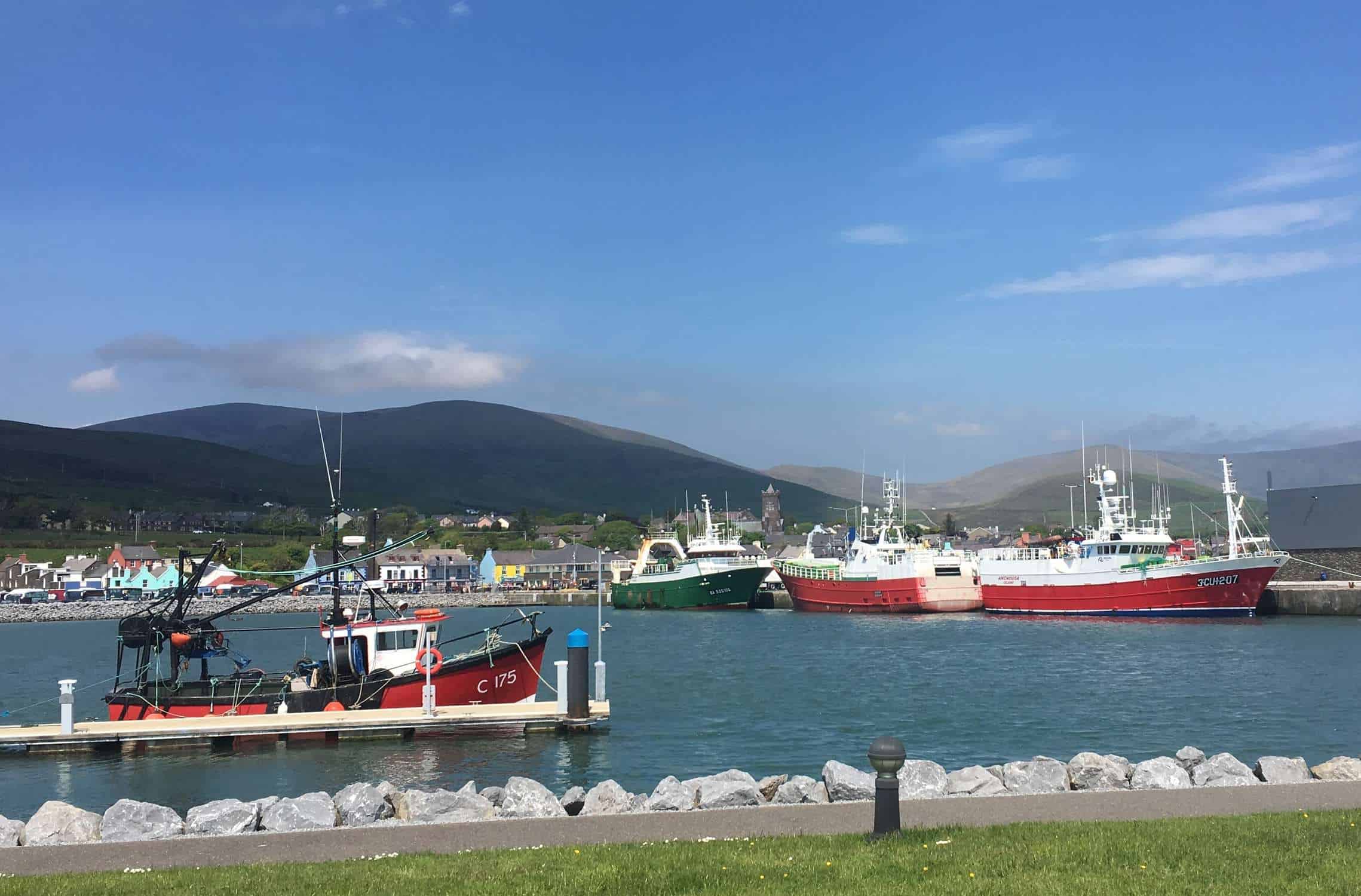 Dingle, or Daingean Uí Chúis in Irish, a town in County Kerry, is on the Dingle Peninsula on the Atlantic coast. It is about 30 miles southwest of Tralee and 40 miles northwest of Killarney. The major economic interests are tourism, agriculture, and fishing (4th largest fishing port in Ireland). Since the 13th century Dingle traded with Europe, especially northern Spain where many Irish made a pilgrimage to the shrine of St. James in Santiago de Compostela; in fact the main dock was called the Spanish Pier. Dingle was the only walled town in Kerry, dating from 1607. St. Mary's is a neo-Gothic church built in 1862. There are many opportunities to hear traditional Irish music in the town, particularly during the summer tourist season. Dingle has 38 pubs as well as restaurants and cafes. There is also an aquarium, "Dingle Oceanworld Aquarium," one of only three in Ireland, home to a number of tropical, foreign and native animals, and a number of art and craft shops. Dingle Distillery was launched in Dingle in 2012 and its Gin has received highest status. 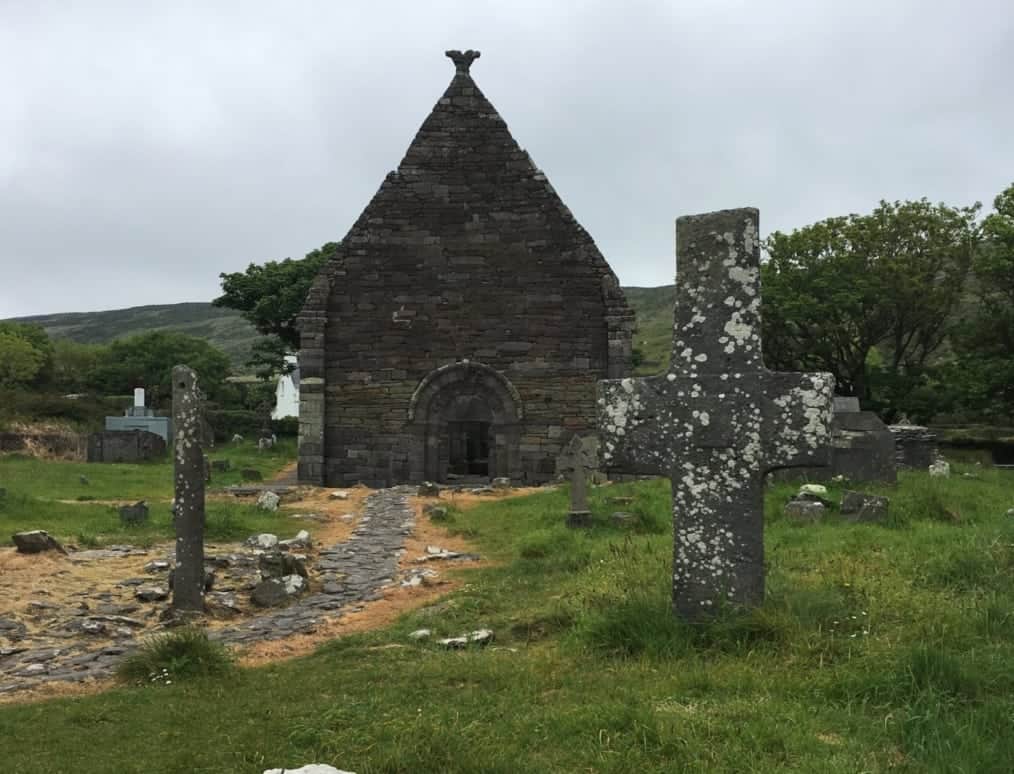 Famous Sites on the Dingle Peninsula

Few places in western Europe have such a density of some 2,000 archaeological monuments as the Dingle Peninsula, which has supported populations for almost 6,000 years, and thus one of the best open-air museums. Some of the most important are the Gallarus Oratory (Séipéilín Ghallarais) built of Silurian Old Red Sandstone, using corbel vaulting so that from foundation to roof peek stones complete the entire structure without movement. It was most likely constructed in the 12th century. The Kilmalkedar Church, or Cill Mhaoilcéadair, is associated with St. Brendan, but reputedly founded by Maolcethair in 636. The current Romanesque church was built in the 12th century on the ruins of the 7th century monastery. Minard Castle is a mid-16th century Fitzgerald castle built on the south side of the Dingle Peninsula. In 1650 Cromwell attacked the castle and it was partially destroyed. Reask Monastic Site is a medieval site used from the 5th to the 10th centuries. See an excellent timeline history: https://dinglehistory.com/.

Restaurants and Pubs in Dingle

RESTAURANTS: Despite its small size, Dingle is well known for its many restaurants and pubs. In 2014 Dingle won the “Foody Town of Ireland” award, which is a national competition very hard to win given some large and cosmopolitan cities. There are a range of restaurants in Dingle in all price ranges. The Global Village, Michelin recommended, was awarded the best emerging Irish cuisine in 2014 and best restaurant in Kerry in 2013. The Pantrí Café serves innovative breakfasts to lunch. As one could expect many are famous for seafood and range in price: high on the list is Doyle’s Seafood Restaurant, Out of the Blue Seafood, The Boatyard, and the Fish Box. Many other restaurants serve local and European food such as The Chart House, The Half Door, and Grey’s Lane Bistro. The are several places open only through the day with tasty and reasonable lunches, such as Goat Street Café, Deirdre’s Café, or for some of the best coffee the Bean in Dingle.
PUBS: There are a variety of ‘Public Houses” (Pubs) in Dingle. Some pubs have frequent Irish traditional and folk music, such as O’Sullivan’s Courthouse Pub, The Mighty Sessions, and one of the oldest pubs, O’Flaherty’s. Other pubs have and remain part store part pub or ‘haberdasheries’, retaining the patina of the mid-20th century, such as Dick Macks, Foxy Johns, and J. Curran’s Bar. Many other pubs are associated with restaurants and have a proper bar, some music, and delicious pub food, such as Murphy’s Pub, John Benny Moriarty’s, McCarthy’s Pub, James Long Pub, Paul Geaney's Bar, Ashe's Bar & Restaurant, and the Marina Inn. One of the most popular bars for young people is the Small Bridge/ An Droichead Beag.
Follow our adventures in Dingle!
@shuindingle
They’ve arrived! Welcome everyone to Dingle for

Excited for the start of our short term May progra

Forget about 63’s, when you are in Dingle, the w